Once I had the vodka, I wanted to make something fun, elegant but fun. First thought of a martini, but what is more elegant than a Cosmopolitan. If you don’t believe me, ask the girls from Sex and the City! So I decided to do a variation of a traditional Cosmopolitan, using the botanical vodka and some Cointreau Instead of plain cranberry juice, thought the Cranberry and Pineapple juice mix would give it a little more tartness. I had dried rose petals, that are very aromatic and look so pretty, so why not, throw it in as a garnish and voila! Had to admit, had two of them when I came up with the recipe! It is so good! 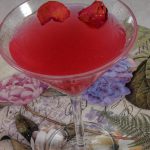 This is a Variation of a Cosmopolitan, more aromatic and very difficult to just have one!

You can replace the juice for a Diet version.

You can replace the rose petals with lime peel spirals.