There is coconut. And there is cake. And Rum. What is not to love?! This coconut rum cake is outstanding! Some time ago one of my ex-coworkers brought this delicious cake to the office and we were all in love! Even though it didn’t have rum, it was still delicious. So I asked him for the recipe. I brought it home, and my husband, who is more of the baker in our home, tweaked the recipe, and amongst other things, added the rum and voila! Delicious coconut rum cake!

I have brought it to many parties. And gifted it for the Holidays many times. It is just a very easy to make cake that travels easily and wraps perfect for a special gift.

I use coconut rum. But you can easily make it without the rum if you aren’t interested in the rum part. Just replace the rum with water, it works the same. But if you prefer the rum, you don’t have to limit yourself to coconut rum. My husband prefers it with spiced rum or dark rum and it is delicious. It’s not as “coconutty” in flavor as when you add the coconut rum, but the flavors of the other rums add a different dimension that you will not mind!

Buttermilk is not something that I always have in my refrigerator. And sometimes, when inspiration hits, I don’t want to make a trip to the grocery store. I would much rather use what I have at home. So I have learned to come up with substitutions for the buttermilk that works almost as good. Almost. For example, you can use a cup of whole milk and add 1 tbsp of either white vinegar or lemon juice and let it sit for 5 minutes until it curdles. Or you can replace the buttermilk with plain yogurt. Both of those work really well and will not greatly change the taste of your cake.

This episode is a very special one. My friend Ron Burgandy offered to record and direct this episode and of course I said Yes!! He is brilliant! He is the owner of Studios KRP (http://www.studiokrp.com) and his films and videos are superb! This episode is filmed in 4K and his ideas were so much fun! I am sure you are going to enjoy it as much as we did! Also, we got the pleasure of having one of my best friends, Zumba Celina (https://www.facebook.com/ZumbawithCelina) make an appearance in the video. She is much loved and I am so happy she was able to join me! 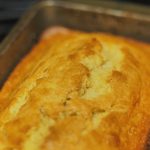 This is an awesome cake, great coconut flavor! The glaze can be made with coconut rum, or if you prefer nonalcoholic, you can replace the rum with water. It will be as delicious either way!